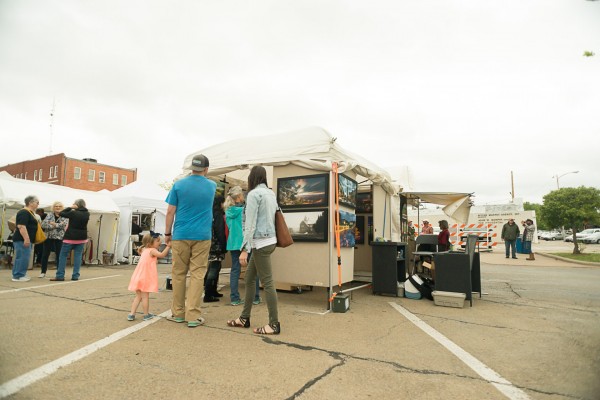 Sunny days are the exception at this show. I live here, it’s my ‘hometown show’, and I’ve done it since 2008. Let’s recap:

This was the first time that I remember an entire day being canceled. For just rain? really?? feh.. we could have done it.

Upon check in, we got the usual fare: street map, tax info, a review sheet, and then some trinkets: In past years, they’ve given us ink pens, t-shirts, travel mugs.. This year: sunglasses and a selfie stick. (My suggestion for next year: umbrella and a squeegee.)

Aside from still being on Husband Street (one block west of Main Street, its location from 2010 to 2014), they didn’t change the layout of the show. We were in groups of four, so everyone got a corner booth, but the entire show was scooted to the west side of the street for fire safety purposes.

The unload process is pretty good. Being on Husband Street means there are parking lots in every direction, and most of us didn’t have to park on the street in order to unload.

good proximity to the Postal Gallery

First order of business: I had to go meet up with fellow photographer Ken Smith. A few weeks ago, he contacted me on Facebook and was interested in purchasing my print bins. (I was offloading them because the dark bins don’t match my new light-colored panels.) It was great meeting him. We had a good chat, and he seemed very experienced with doing art shows. He offered some business tips that I’d never heard of: get two coaches — a business coach (with no art experience), and an art coach (with no business experience), and have both of them individually critique your operation. The business coach led him to set up an LLC. His art coach (his wife) offers tips like, “only offer images that customers want to buy.” — That means: If she likes it, it goes in the booth. If she doesn’t it, he has to keep shooting. Brilliant plan! :)

Since I no longer have print bins, I designed and constructed a combination print bin / storage bin. By day, it becomes a print bin. By night, it changes back into a box and stores all of my framed pieces. (I’m quite proud of myself. I’ll have to create a whole blog post for this.) And I’ll need a second box before the next show. 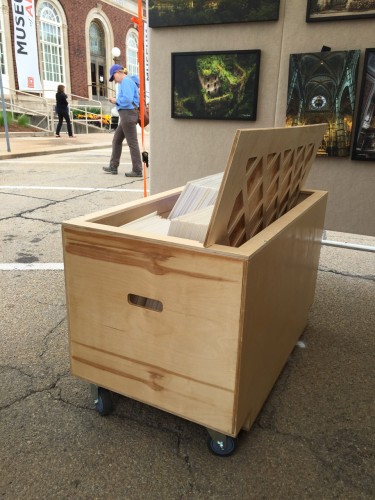 Saturday – Wind. The result if Earth and Fire forget to show up.

(..maybe we could have a show in September.)

Here’s where I apologize for setting up late. I had two excuses: I was assembling new pieces until midnight, and making last-minute modifications to my new box. Since this is my first show of the season, I use it to work out the kinks; whether I plan to or not.

When I arrived at the show, only the canvas gallery wraps (from last year), and the largest framed pieces had hanging wire on the back. The smaller framed pieces had nothing.. I was scrambling. AH! I went through my supplies and found my 75-foot roll of velcro and immediately thought of fellow photographer Dana Echols — he would hang all his work with velcro! Staple it on the back of each piece and slap it up on the wall. I had 20 minutes before the show started, so it was this or nothing. A couple people came by to help with my velcro assembly project (thank you whoever you were! I apologize that I forgot your name!) Here we go: 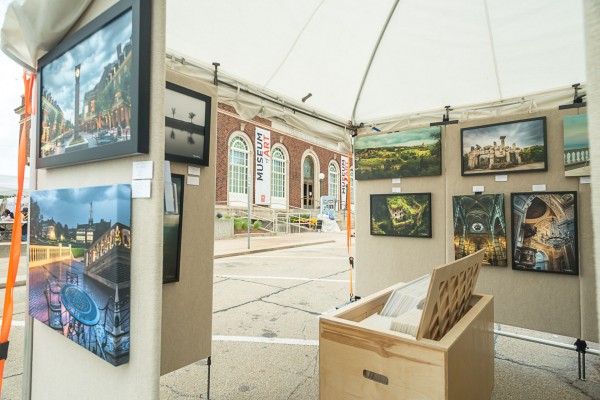 Art on the front porch of an art museum

The best part about velcro is that the pieces really stick to the wall — they don’t swing around in the wind like they otherwise would have. And when I sell one, I remove the velcro (unless the customer has carpeted walls at home. I didn’t ask, that’s their business.)

The crowd was good, even though sales were down. I was behind schedule, so some photos were only available as canvas frames, not prints. I likely missed a few sales because of that.

The forecast for Sunday was so dire that a few people just packed up and left. Now, I can understand asking the director for permission to leave after the first day is over, but one artist had the audacity to park their gigantic cargo van next to their booth while the show was still going on! 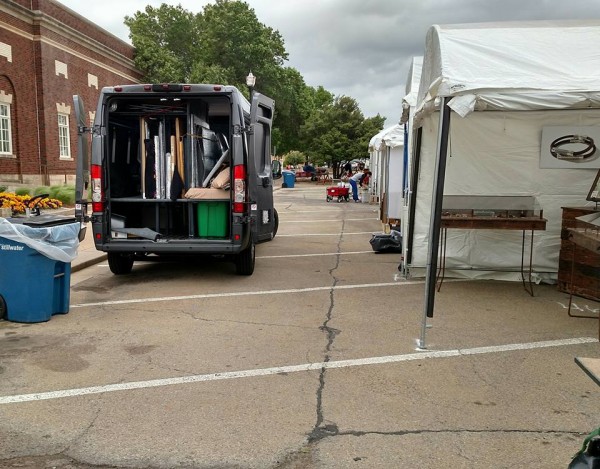 The rumor was that they didn’t have a very good show and didn’t care that they weren’t going to be invited back. But where were the police? Why wasn’t that damn thing towed off and melted down to slag? Not only did I miss it pull in, but management missed it too. The sight of someone packing up makes the show look like it’s over. It made the crowd disperse, made other artists close up shop as well, and it snowballed from there. How about some common courtesy?? Come on, dammit, you had one hour left.

Management made a very serious point that no vehicles were allowed inside the barricades until after Sunday was over. We residents of Stillwater, Oklahoma get nervous when a vehicle wants to blow past the barricades, thankyoumuch.

I decided to store all my artwork in the van, but I left the booth. It’s only rain, but I didn’t want to risk all the new work that I stayed up late creating. 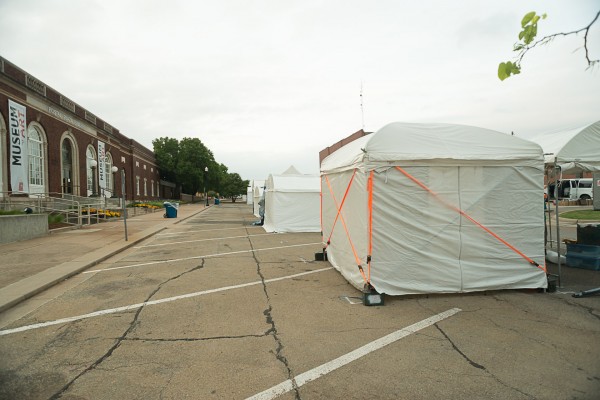 Sunday – The show completed its final transformation into water form. 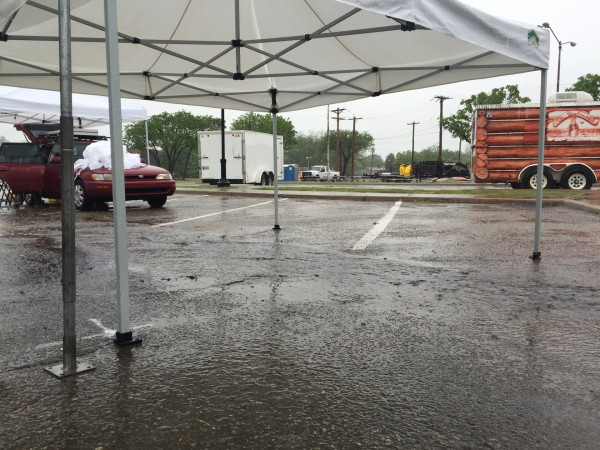 To make up for showing up late yesterday, I made sure to arrive early. Sure enough, it was raining to beat all hell, but I was ready. When I arrived, the show was about 2/3 gone, and several vehicles were parked next to their booths. What happened to everyone? Was everyone late getting back? Did management cave in on their strict rules and let people pull in to unload? It wasn’t just that, the show was over. They sent an email at about 5:00am — a message that I did not receive. 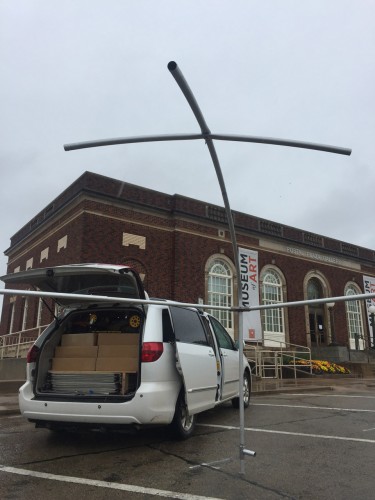 That was it. It ended with a splashy thud. I was looking forward to playing in the rain. Oh, well.

One particular couple are my first customers. They purchased my photo “Elevators” at the Stillwater Art Festival in 2008, and since then, they would stop by, say “hi” and check on me. They would seem quite proud that of the fact that they are my first customer. This time, only the wife stopped by. She and her husband of 23 years are going through a divorce. I had to ask who ended up with the photo: “It went with him. It was for his man cave.”

Quotes From The Show

Two hours into Sunday, most tents were gone, and the only volunteers left were the show director and her boyfriend/husband.

As we’re packing up in the pouring rain, I overheard an artist from a neighboring booth (who made crafts of a mystical sort) tell the show director, “It sure rains a lot at this show. What you need are some weather witches!”

Without skipping a beat, the director comes back with, “I’ll ask if we can fit them in the budget.”